Micromax has officially launched a new mobile named Micromax Canvas MAd A94, an android mobile which pays you for watching advertisements. You just have to watch ads through a app named MAd, after watching the complete advertisement, you will be rewarded with some points and those points can be converted in to rupees while recharging you prepaid or while paying paying your prepaid. Its just an App, so we expect anytime release of this App for other canvas and android mobiles too. Canvas MAd A94 is officially priced at Rs 8490. Now lets talk about the specifications of this smartphone. Micromax Canvas MAd 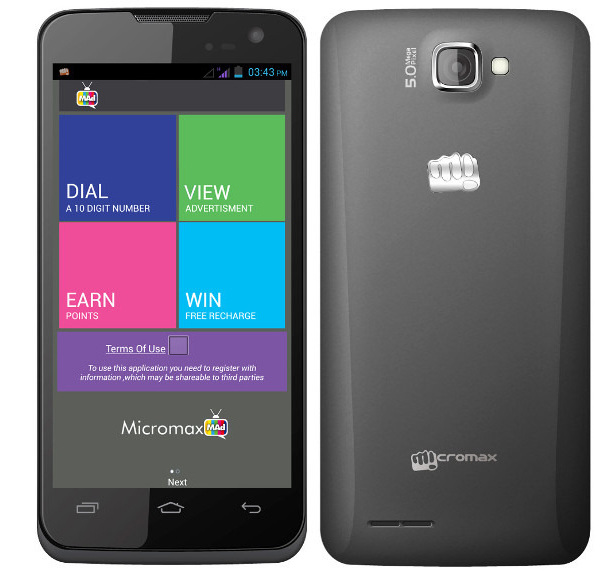 Micromax Canvas MAd is a 3G enabled 4.5-inches of mobile which is having a qHD display with 480 x 854 on-screen resolution, 1.2GHz quad core Broadcom BCM23550 processor combined with Vidcore IV GPU to enhance your gaming experience. This processor has been assigned along with 512MB RAM, which will provide good enough multi-tasking but expect a lot from this. Its having Android 4.2 Jelly Bean OS and 4GB internal memory, don’t worry on this, Canvas MAd A94 is also having a memory card slot through which you can its memory till 32GB via micro-SD card and also, install your games on the same. It is having a 5MP camera on the rear and 5MP camera on the front also. Following the same canvas series trend, this phone is also having dual sim card slot with dual standby mode. Micromax has provided 1800 mAh battery on this which will keep you alive for 15-18 hours while using 2G.